Merry Christmas! Or for the secular folks, Happy Wednesday!

Exactly 2 weeks ago, I finally changed the tuners on my Squier MB-4. I originally purchased this bass around 2002, meaning I’ve had it for around 17 years! I actually broke the fourth string tuner about 5 years later (approx. 12 years ago), and my friend replaced it for me. I probably should have replaced all of the tuners way back then.

Since I replaced the tuners on my 7-string Squier earlier this year, I felt comfortable installing new tuners on this bass.

Disclaimer: if you purchase any musical instrument that’s described as less than professional grade (ie “entry level” or “midrange”), expect to make some modifications to extend the life of the instrument. The sound quality of lower-level instruments isn’t necessarily bad, but a lot of the price in a professional-level instrument goes into the hardware and details such as tuners, frets, wood and paint finishes, and electrical wiring. You should always prioritize sound and comfort when purchasing an instrument! Generally, modifying a guitar is cheaper than replacing it.

First off, let’s go over the one thing I don’t recommend, but I did anyway: don’t reuse strings! I literally broke the tuner the day after installing new strings, so I thought a couple days couldn’t hurt. This is not recommended because old strings, especially bass strings, can unwind or get separated from their core. When strings are undone in this way, they might slip while playing or tuning your bass and then you’ll need to change the strings anyway. Save yourself some stress and install new strings after you change your guitar’s tuners.

The very first thing I did was completely remove the broken tuner. This makes it easy to see if other things need repair. The problem tuner snapped where the capstan attaches to the pinion gear, so I needed to make sure there weren’t any more metal bits hanging around. (After researching the names of the parts of guitar tuning machine heads, I learned why runners are oriented a certain way. Now I have to consider replacing the right-hand tuners that I installed upside down on my other guitar.)

Next I detuned the other strings so I could remove the other old tuners.

Once the strings were free, I used a wrench to undo the shoulder bolt things on the front of the headstock. 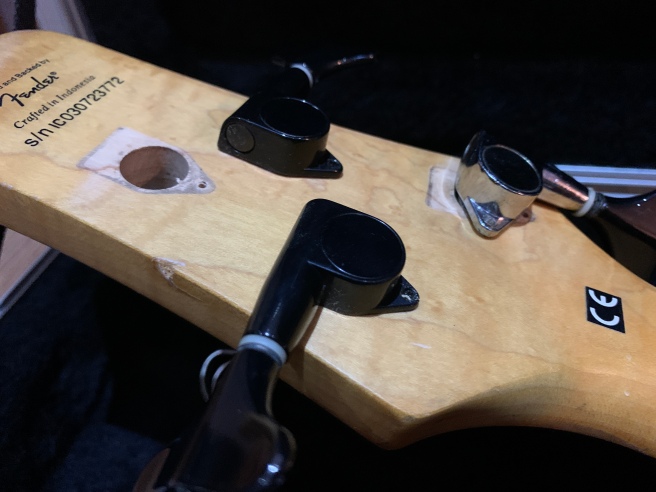 Next I removed the screws on the back of the headstock. 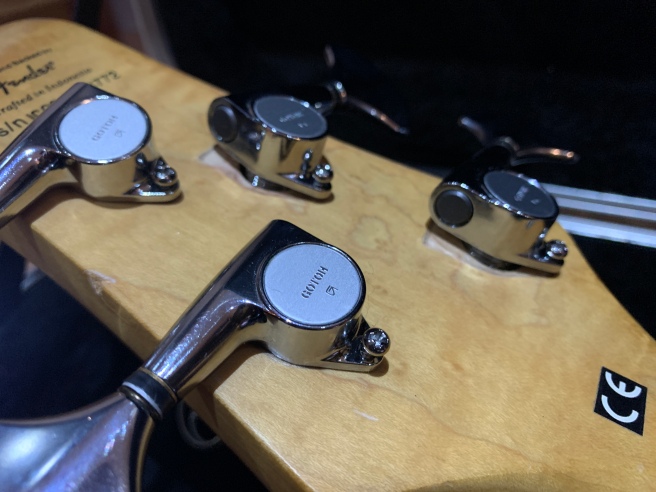 I then installed the new tuners in the opposite order by screwing them halfway in on the backside of the headstock. 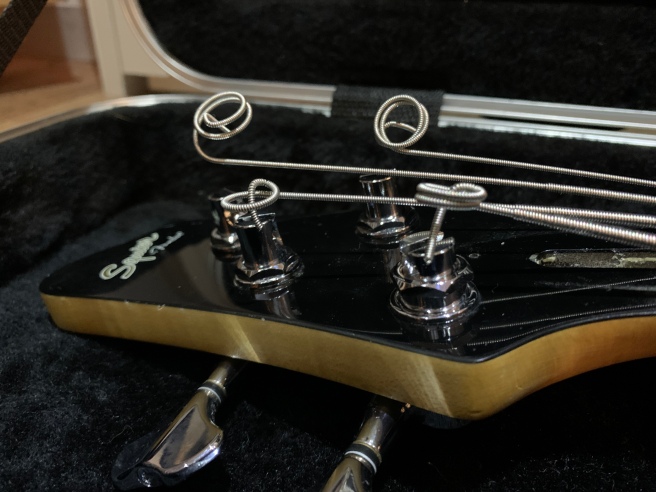 Then I screwed in the new shoulder bolts.

And then finished driving the screws on the backside. 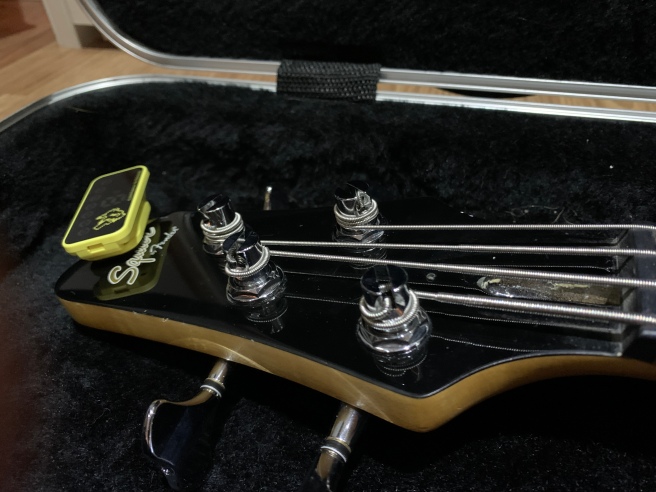 When the machine heads were secured and snug, I fed the strings into the capstans and tuned with my trusty Pikachu tuner. The end!

The process took me about 30 minutes once I gathered the two tools I needed (15mm wrench and small screwdriver). I flipped the guitar upside down and right-side up four times and used my case instead of a workbench.